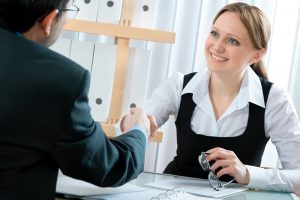 All too often, jobseekers snatch defeat from the jaws of victory; they see rejection too quickly and end up essentially rejecting themselves. If you can adopt the mindset of a successful salesperson, however, you’ll see opportunity where others might see rejection.

That’s because in a job search, your “job” is now sales (you’re the product), regardless of what you do professionally. Successful salespeople are good at finding ways to turn apparent rejection into opportunity, so if you can start thinking to yourself “What would the best salesperson in the world do?” you’ll see improved results.

To illustrate this mindset in action, here are four client success examples where victory was snatched from defeat. The key themes across these examples are: assertiveness (but not aggressiveness), respectful persistence, relationship-building, and a focus on the employer’s needs.

Creative Director who did poorly in an interview

My new client told me about an interview for a creative director position that didn’t go well. Her regrets were mostly around all the things she could have said to make her case, but didn’t. After the interview she wrote a thank you note, and 10 days later still had not received a response.

Applying the “best salesperson” mindset, I said “look, you’ve still got a chance – they haven’t said ‘no’ yet” and suggested she write an influence email (as opposed to a thank you note) with the subject line ‘Additional Thoughts.’ In the email she brought up things she didn’t emphasize enough or forgot to bring up in the interview. To improve readability, she used subheadings, bullets, bolding, underlining, and short paragraphs. She made every word count, used illustrative examples, and used words like “you” a lot to show she was focusing on their needs, as in “In our call you asked about…” and “My experience can help you…”

Just a few hours after she sent this email, she received an appreciative response from the hiring manager and a request for another interview. In the subsequent interview, the hiring manager told my client that this second follow-up email was the reason they decided to see her again. She ultimately received an offer that she was very happy to accept.

Finance executive turned down for the job

One client was despondent because he didn’t get the offer after going through several rounds of interviews at a large financial institution. The countless hours he felt he wasted preparing for these interviews only added to his frustration.

After discussing it, we decided on a course of action. He called the hiring manager, who he got along with on a personal level despite not getting the offer. He tried her before 9am, when she was less likely to be in meetings and more likely to pick up– and she answered!

He was gracious on the call, wishing her success with the new hire. He then asked for feedback that could help him with future interviews, which he received. And finally, he said “well, since you now have a good understanding of my experience, is there anyone else you suggest I might talk to, either in this company or elsewhere?” He got a referral to another department in the company, then reached out to this other department mentioning the referral, and received an interview there.

Following a series of interviews at one company, my client received a polite rejection email from the hiring manager, explaining that they were going to focus on other candidates with more experience. But instead of giving up on this opportunity, she wrote a powerful email response.

She started off this email by saying “I appreciate your candor. From your note, it sounds like you are identifying some highly qualified candidates. I would like to note, however, my blend of experience that uniquely differentiates me from the others.” Then she listed four bullet-pointed examples that highlighted her unique competitive advantage. The result? They re-opened the interview process to her and ultimately offered her the job.

My client had been in a long search while working full time. An interview months earlier resulted in radio silence. I suggested he make an effort to keep in touch roughly once a month, regardless. The holidays were coming up, so he sent a holiday greetings email to the hiring manager who had been uncommunicative since the interview months ago.

My client didn’t ask for anything in the email, not “what’s the status?” or anything like that, since that would only betray insecurity rather than abundance, without any tangible benefit. Instead, his goal was to just remind the hiring manager that he existed and was interested enough to send a note. He simply wished him a happy holiday season and New Year, and briefly updated him on what he was up to. A couple of days later, my client was surprised to receive a response from this executive requesting that he re-send his resume. The interview process for a new, even better position was re-started.

« Listen Up! Resolve a Work Conflict with This TechniqueYou Need to Start Leading Now. Here’s How »