Listen Up! Resolve a Work Conflict with This Technique 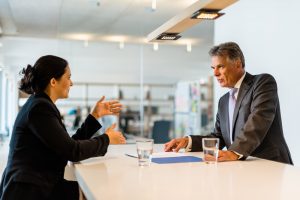 Clients (and I, myself) have found this technique to be very effective. Colleagues are far more open to hearing your point of view once they feel heard. Plus, the technique requires you to truly listen to your colleague, which can lead to sometimes surprising realizations that can change your perspective.

To implement the active/reflective listening approach, start by asking your colleague for a half hour meeting, as you’ll need at least 20 minutes to do justice to this process. Then during the meeting, follow these five steps.

My client Linda brought up a problem she was having with her colleague Sam. Linda had sent an email out to their leadership team. The email contained the results of Linda’s business analysis and recommendations. Linda had copied Sam on the email just for his information, even though he had no involvement in the analysis and would not be impacted.

Linda was shocked when she received an email response from Sam, with all the senior leaders copied, listing a point-by-point rebuttal of each of Linda’s five recommendations. Linda saw that Sam’s critiques were incorrect, as they were based on misunderstanding stemming from Sam’s lack of involvement. But the leadership team had no way of knowing this. Furthermore, Linda felt Sam made her look bad by copying the leadership team on the email containing his criticisms of her recommendations. He should have checked with her first.

Linda was furious that now she had to drop all the priority items she was working on to do damage-control. She showed me her first draft response to Sam’s email, addressed to the leadership team. The tone was too angry, and would have hurt Linda more than it would have helped.

I asked Linda what her goal was. She came up with three: ensure Sam never did something like this again, ensure her reputation with senior leadership remained strongly positive, and get her recommendations approved. Based on her goals, I counseled Linda to check her impulse to respond angrily in the email and she agreed.

Instead, she sent a factual, point-by-point refutation of Sam’s email to both the leadership team and Sam, that even included positive language (“Sam, I appreciate your interest…”). She also requested that Sam take the leadership team off of any further discussion so as not to burden them with back-and-forth emails. She then separately emailed Sam to set up a meeting and discuss the analysis. In this meeting, she would employ the active/reflective listening approach.

She started the meeting by asking Sam why he copied the entire leadership team in his response. Sam said he felt it was important for the leadership team to know about these issues, which Linda expected to hear. But then Sam surprised her by saying that he felt he should have been consulted on one of Linda’s five recommendations before publishing it.

Linda summarized Sam’s comments, reflecting them back to him. She could tell Sam appreciated being heard, especially on the part where he felt he should have been consulted. Linda even empathized with him, saying that she would take his point into consideration the next time she set out to make recommendations for that particular area.

Then she shared her point of view. Sam was surprised to hear that Linda had to drop everything to respond to Sam’s email because it was sent to the entire leadership team. She could see a new awareness dawning on Sam, and he agreed that in the future he would email her directly first before making any criticisms “public.” Then she went through each point that Sam made in his email, in a non-confrontational way, explaining why his lack of information led him to the wrong conclusions. He ended up agreeing with her on almost everything she brought up.

The end result: by both reigning in her instinct to retaliate and making the effort to listen, she achieved all three of her goals. Plus, she was able to improve her relationship with Sam and put it on a stronger, more productive foundation.

Sometimes the problem with another employee can’t be solved by better communication. In these cases, active/reflective listening won’t help. For example, if the issue is related to workplace bullying, you might end up needing to either escalate to a superior, fight back, or find a way to remove yourself from the situation. But active listening will help in the many situations where the root cause of conflict is reactivity, misunderstanding or generally poor communication.