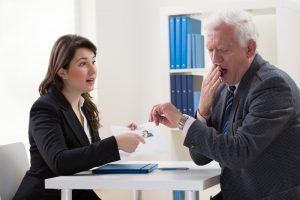 When you’re in an interview with a bad or inexperienced interviewer, they’re not giving you the opportunity to truly make the case for your candidacy. They’re not asking you the right (or any) questions, and in fact they may be turning you off by their behavior.

Very often, however, you can find a way to change the subject back to their number one question, “How can you help me?” and thus do both of you favor; they will get their answer and you’ll stand out from the competition as the candidate who answered this key question. Let’s look at how to improve your outcome in four of the most common bad-interviewer scenarios.

Scenario 1: They go on and on without asking questions

My client thought, “Wow that was the easiest interview I ever had, I didn’t have to say anything!” But then they chose someone else. Why? Because he never told the interviewer how he could help them!

If they aren’t going to ask you, then it’s up to you to find a way to tell them. Interrupt politely or wait for a pause, then say for example, “By the way, I wanted to ask you about that requirement in the job posting as it reminds me of a project I completed in my most recent role…” Most of the time they’ll happily switch gears and you’re on your way.

Scenario 2: Too much time is wasted discussing non-work-related topics

Bonding over things you have in common (same home town, school, interest, etc.) is great for establishing rapport and can help them to learn whether you’ll be a good fit. But at some point you need to move on to their most important question, “How can you help me?”

As in the prior scenario, if they aren’t asking the right questions then you need to. Again, find that break in the conversation and then ask them a question that puts you on the path toward learning and showing how you can help them.

The one caveat: if you’re in sales, this rapport-building conversation may be the way they are assessing your ability to build prospect relationships. Even in this case, however, usually at some point in the interview you’ll want to ask how they define success in this role, so you can further share how you can help.

When you get an inappropriate question, try to assume the best; these questions are often asked innocently with the intent of learning something relevant to job performance. Answer the question by refocusing on the underlying issue you assume they really want to learn about. This way you keep your options open until you have time later on to think about whether their question is truly a bad omen.

For example, one of my clients was asked, “What’s your religion?” She smartly answered, “If you’re interested in whether I can work on weekends that won’t be a problem at all.” That answer ended up addressing the hiring manager’s real concern. Because everything else in the interview process went so smoothly, she decided to accept their job offer, and the role turned out to be a great fit for her.

Here are some other examples of re-framing illegal or inappropriate questions:

Sometimes the behavior is so rude that you are justified in saying “thanks but no thanks” right in the moment. That said, I suggest once again trying to keep your options open.

Here’s a personal example. Early in my career I interviewed with four people for a job. All the interviews went great, I loved them, they loved me.

Then I met my boss’s boss. He didn’t shake my hand, didn’t say hello. Instead, the first thing he said was, “I don’t think you’re qualified for this position and you want too much money.” Inside, I was completely turned off by his rough tone. But I took the “keep my options open” approach and simply said: “Those are obviously important considerations. I do see things a bit differently and here’s why…” and made my case.

When I left the interview, I called the search firm who set it up and said I don’t want to work for this guy. The recruiter persuaded me to go in one more time and meet with HR. I relented, and when I met with HR he was there as well. He apologized to me for his approach, and said he was testing me because some of the clients I would have to deal with could be difficult!

I ended up working for him for years and we had a great working relationship. The moral of the story: keep your cool, re-focus on the underlying issues, and unless it’s really egregious, try to keep your options open until you have time to think.

Bonus Scenario: They repeatedly cancel at the last minute or are late without apologizing

When this happens (especially more than once), they are giving you important information about what it will be like to work with them. Do you really want to place yourself in this environment? Perhaps thank them for the valuable information they are inadvertently giving you, and then run away!

« Want a Promotion? Then Do These 4 ThingsUnemployed? 3 Ways to Fill that Gap in Your Resume »